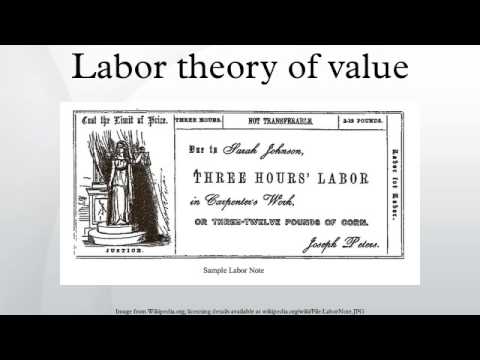 Why are so many students convinced that they should receive better grades for the papers they’ve spent so much time writing? It’s not a belief about the quality of those papers; it’s a belief about the hours and hours spent working on them.

This fundamental misunderstanding about the value of labor is at the center of the Marxist critique of capitalism.

The Center of Everything

For thousands of years, humans were sure that the earth was the center of the universe and the sun revolved around it. With the advent of systematic inquiry, scientists had to develop more and more complex explanations for why their observations of the universe did not fit with that hypothesis. When Copernicus and others offered an alternative explanation that was able to explain the observed facts, and did so more clearly and concisely, the heliocentric model triumphed. The Copernican revolution changed science forever.

There is a similar story in economics. For hundreds of years, many economists believed that the value of a good depended on the cost of producing it. In particular, many subscribed to the labor theory of value, which argued that a good’s value derived from the amount of work that went into making it.

Much like the geocentric view of the universe, the labor theory of value had some superficial plausibility, as it does often seem that goods that involve more labor have more value. However, much like the story in astronomy, the theory got increasingly complicated as it tried to explain away some obvious objections. Starting in the 1870s, economics had its own version of the Copernican revolution as the subjective theory of value became the preferred explanation for the value of goods and services.

Today, the labor theory of value has only a minuscule number of adherents among professional economists, but it remains all too common in other academic disciplines when they discuss economic issues, as well as among the general public. (The labor theory of grades is, as I noted above, particularly popular among college students.)

The Specter of Karl Marx (and Adam Smith)

One reason the theory is still the implicit explanation of value in many other disciplines is because they rely on the theory’s most famous adherent for their understanding of economics: Karl Marx. Marx was hardly the only economist to hold this view, nor is the labor theory of value unique to socialists. Adam Smith believed in a somewhat weaker version of the theory as well.

Without the labor theory of value, it is not clear how much of Marx’s critique of capitalism remains valid.

For Marx, the theory was at the center of his view of the problems of capitalism. The argument that capitalism exploited workers depended crucially on the view that labor was the source of all value and that the profits of capitalists were therefore “taken” from workers who deserved it. Marx’s concept of alienation focused on the centrality of labor to making us human and the ways in which capitalism destroyed our ability to take joy in our work and control the conditions under which we created value. Without the labor theory of value, it is not clear how much of Marx’s critique of capitalism remains valid.

Part of the problem for Marx and others who accepted the theory was that there were so many seemingly obvious objections that they had to construct complex explanations to account for them. What about the value of land or other natural resources? What about great works of art that were produced with a small amount of labor but fetched extremely high prices? What about differences in individuals’ skill levels, which meant that there would be different amounts of time required to produce the same good?

The classical economists, including Marx, offered explanations for all of these apparent exceptions, but, like the increasingly complex explanations of the geocentricists, they began to feel ad hoc and left people searching for a better answer.

In economics, that answer came when, much like Copernicus, several economists realized that the old explanation was precisely backward. This point was clearest in the work of Carl Menger, whose Principles of Economics not only offered a new explanation for the nature of economic value but also founded the Austrian school of economics in the process.

What Menger and others argued was that value is subjective. That is, the value of a good is not determined by the physical inputs, including labor, that helped to create it. Instead, the value of a good emerges from human perceptions of its usefulness for the particular ends that people had at a particular point in time. Value is not something objective and transcendent. It is a function of the role that an object plays as a means toward the ends that are part of human purposes and plans.

Thus, according to the subjectivists, land had value not because of the labor that went into tilling it, but because people believed that it could contribute to the satisfaction of some direct want of their own (such as growing crops to eat) or that it would contribute indirectly to other ends by being used to grow crops to sell at the market. Works of art had value because many people found them to be beautiful no matter how much or how little labor went into producing them. With value being determined by human judgments of usefulness, the variations in the quality of labor posed no trouble for explaining value.

Indeed, economic value was a completely separate category from other forms of value, such as scientific value. That’s why people pay money to have someone give them a complete horoscope reading even though astrology has no scientific value whatsoever. What matters for understanding economic value is the perception of usefulness in pursuit of human purposes and plans, not some “objective” value of the good or service.

The high market value of well-prepared food is not the result of the value of the chef’s labor. Rather, the chef’s labor is valuable precisely because he is able to produce food that the public finds especially tasty, beautiful, or healthy.

On this view, labor gets rewarded according to its ability to produce things that others value. When you then consider the ways in which labor combining with capital enables that labor to produce goods that humans value even more, which in turn increases labor’s remuneration, Marx’s whole worldview is suddenly turned on its head. Capital does not exploit labor. Instead, it enhances labor’s value by giving labor the tools it needs to make even more of the things that humans value.

Understood correctly through the subjective theory of value, capitalism is fundamentally a communication process through which humans try to sort out how best to make use of our limited resources to satisfy our most urgent wants. Exchange and market prices are how we make our subjective perceptions of value accessible to others so they can figure out how best to provide us with the things we value most.

We Have More Work to Do

For economists, the labor theory of value holds roughly the same validity as the geocentric view of the universe. For that reason, Marx’s whole theoretical apparatus, and therefore his criticisms of capitalism, are equally questionable.

Unfortunately, many people, academics outside economics and the public alike, are simply unaware of the Copernican revolution in economics. Knocking down the labor theory of value remains a labor-intensive and valuable task.