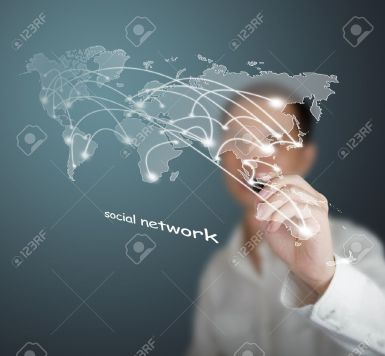 Everyone knows that large companies share board members, but it’s hard to appreciate just how enmeshed global governance has been for decades until you see the connections. I partnered with Meindert Fennema of the University of Amsterdam and William K. Carroll from the University of Victoria to show how companies’ boards interlock and to study the implications for when a crisis hits. We plotted shared directorships among 176 large companies in 1976 and 2013, two years that followed a major global economic crisis

In 1976 more than four out of five of these large companies shared board members. Each node represents one company. Lines represent a shared board member between the two companies the line connects. Straight lines inside the circle are transnational connections, while outside arcs are regional links. In total, these 176 companies shared 368 board connections. Most links — 82% of them — are regional, as seen in the thick nests of gray links, particularly in the European Community (EC).

The 1976 network is also characterized by people we call “super connectors.” Just 23 of these people form 114 of the links — that’s 31% — in the graphic. Most of these super connectors are regional. Some companies, especially in the EC, shared dozens of board members. For example, as the graphic below shows, leaders at Volkswagen were deeply enmeshed with other EC companies.

Notable examples of this dense network include Peter von Siemens, who was chair of the board of Siemens from 1971–1981 and also served at Deutsche Bank, Mannesmann, and Bayer; Hans Lutz Merkle, who was CEO of Bosch and sat on the boards of Volkswagen, Deutsche Bank, AkzoNobel, and Shell; and Sir David Barran, who was on the boards of Canadian Imperial Bank of Commerce, Shell, Midland Bank, and British Insulated Callender’s Cables.

One reason large businesses linked up regionally was to build resilience against global economic threats, namely the oil crisis and recession. The oil crisis also spurred the creation of a small but well-defined international network of board connections. About 18% of interlocks were international in 1976, and most of those were transatlantic links in finance and energy — two of the first industries to begin globalizing because their production process is inherently international. Companies such as Shell, visualized below, had become global governance players because they started to connect their boards to international industrial finance companies around the globe.

Fast forward to 2013 and we see a remarkable change — try toggling between the two years in the graphic below. We again used 176 large companies, but the total number of links dropped 37%, from 368 connections to 233. (Some companies have changed from the 1976 version, but we kept the same sample size and global distribution of companies.) The average links per company dropped from just over two to just over one.

In 1976 the business elite focused their energy on building deeply enmeshed regional networks. The response to the recession in 2008 wasn’t the same.

Regional networks did not form in reaction to the 2008 crisis. In fact, they’ve dissipated, while global connections have grown stronger. Even though there are 40% fewer total board links today than in 1976, there are more transnational links; international connections now make up a quarter of all links. Companies such as UBS, visualized below, build resilience against weak economies and increase their global business scan by sharing board members internationally and influencing decisions collectively.

Notice that in both 1976 and 2013 Japan and Korea, as well as companies from other Asian nations, have remained outside the interlocking network. There’s a distinct cultural approach to boards in these regions. The business networks in Asia are typically organized in business groups that include keiretsu (Japan), chaebol (Korea), guanxi qiye (Taiwan), and qiye jituan (China). The board interlocks we studied connect a few companies in these business groups but do not connect companies between them. Hence, Japan (in blue) has remained mostly outside both regional and transnational governance networks.

The number of influential super connectors, too, has fallen precipitously: Just five board members were super connectors in 2013, accounting for 12% of all links (compared to the 23 people who accounted for 31% of links in 1976). Demands of the position and increased regulation mean executives don’t like to or can’t sit on as many boards as they used to.

Some people have argued that consensus among the global business elite during the 2008 crisis helped keep the world financial system intact, much the way the dense network of regional links staved off an earlier economic and energy crisis in 1976. But because today’s board network is less interconnected in structure, companies have a harder time working together to reach consensus about the proper response to a crisis.

There’s no question that the network of interlocking board members is becoming thinner, less centralized, and less oligarchic in structure. Some research suggests that fragmented networks will be ill-equipped to respond to major shifts and economic breakdowns. (This argument is best developed in Mark Mizruchi’s book The Fracturing of the American Corporate Elite.) Rather than concluding that the system of interlocking boards worked following the 2008 financial crisis, we acknowledge that the dissipating, less linked governance structure survived. But for how long will it continue to do so?

look here for the charts