Are corporate boards as polarized politically as the general population? That’s one of the questions we asked ourselves as we conducted a survey of directors of public and private companies headquartered in the United States.

Even here in Malta this issue arises with relevant importance and validity , partly because the high number of foreign companies present in Malta, in order to be compliant with international standards for tax purposes (see the case of dummy company and tax inversion) , must have a board of directors with directors and NON EXECUTIVE DIRECTOR , residents in Malta, supporting and providing clear and convincing evidence that the foreign company is effectively managed from Malta.

Furthermore having a NED with international experience in the BOARD, reinforce widely the diversity, independence and compliance requirements for a better Corporate Governance, Leadership and Business results

30+ years Board, Governance, Investment’s  experience and practice for YOUR BOARD needs and solutions

We and our research partners found that Republicans are more highly represented on boards than in the general population: they were 50% Republicans, 24% Democrats, and 26% Independents, while the American public, according to Gallup, is 28% Republicans, 31% Democrats, and 39% Independents. But affiliation doesn’t guarantee enthusiasm, as this sample of survey comments reveals: “On sabbatical from the Democratic party”; “Republican, unless they keep acting like goofballs”; and “Independent (especially this year!).” 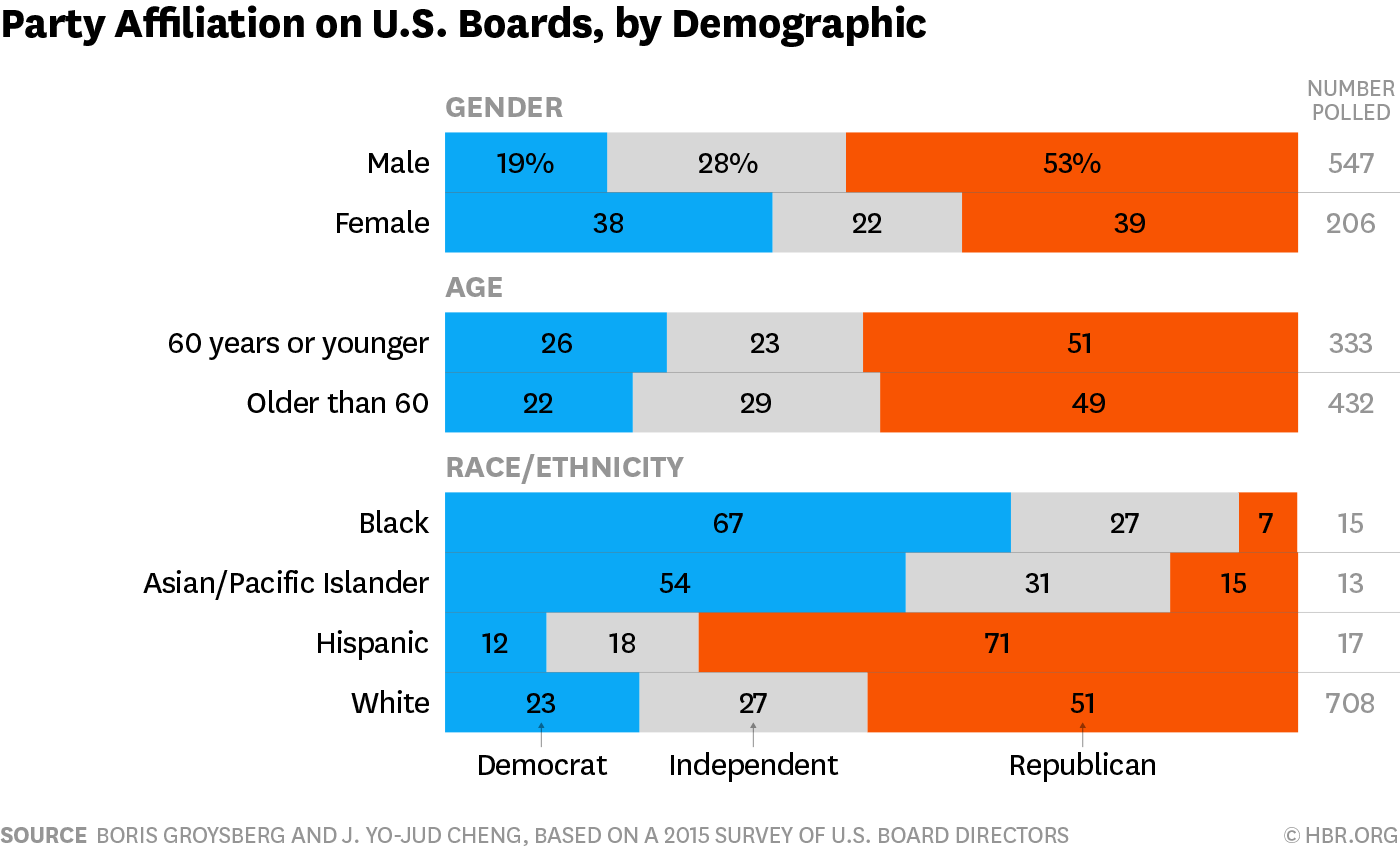 We also found that industry matters. Boards of companies operating in the consumer discretionary industry have a disproportionately high representation of Democrats, while boards operating in the industrials and energy and utilities industries skew more Republican. The proportion of Democrat and Republican directors does not substantially differ between public and private firms. 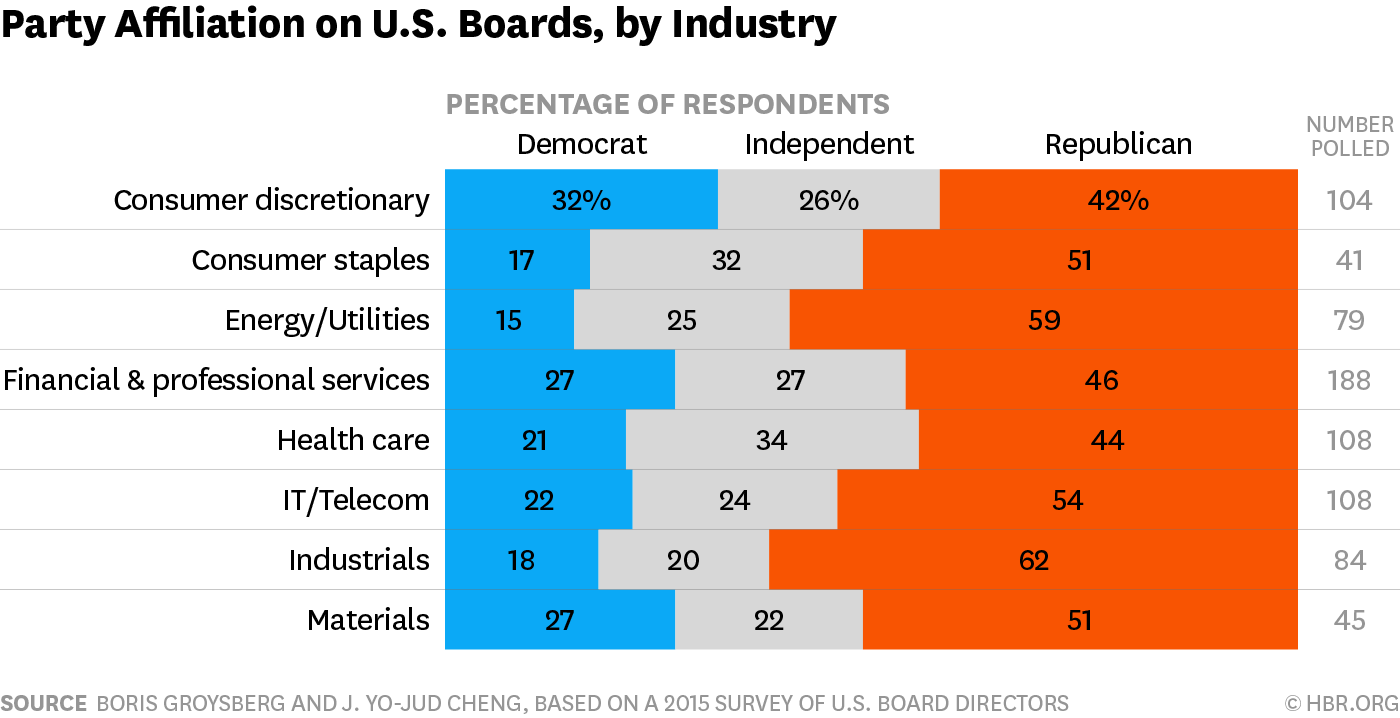 We found that directors of all political stripes care a lot about the economy and cybersecurity, and that Republican and Democrat directors are aligned in their concerns about political instability and healthcare costs, even though they may have conflicting views on how these costs should be contained. Alongside these commonalities, we also found some notable partisan differences. Democrats are less pessimistic about the economy: 10% of Democrats expect a global economic slowdown in the next three years, compared to 18% of Republicans. Democrats care more about economic justice, environmental sustainability, and equal rights for women. Republicans care more about corporate tax rates, the national budget deficit, and regulation. The ideological divisions we’re seeing in the political arena have permeated the boardroom. The disparities in the perceived importance of these issues could affect how directors prioritize and choose to address risks to the company. 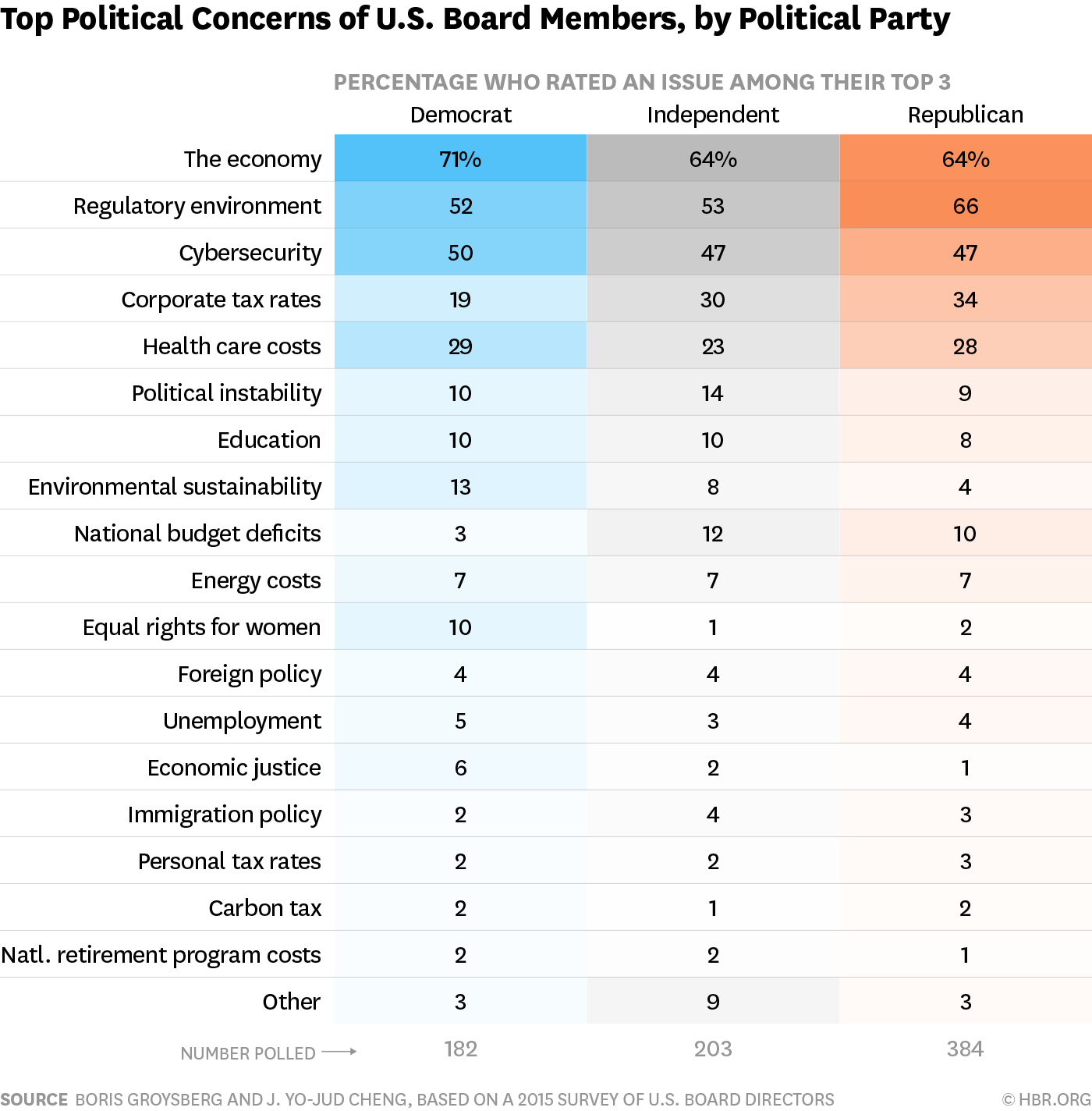 Directors are also consistent in their views of the key challenges to achieving their companies’ strategic objectives: attracting and retaining top talent, the regulatory environment, and domestic competitive threats top the list for directors from both parties.

Our limited sample suggests that both groups agree that board leadership should serve as champions of board diversity, but they differ on the policies they advocate to increase board diversity. Republicans generally favor developing a pipeline of diverse candidates through director advocacy and mentorship, while Democrats are more likely to favor requiring that every director slate include diverse candidates, or that boards implement targets for diverse membership. Democrats are also more strongly in favor of boardroom quotas for diversity, and Republicans are strongly against disclosure requirements on steps taken to seat diverse director candidates. 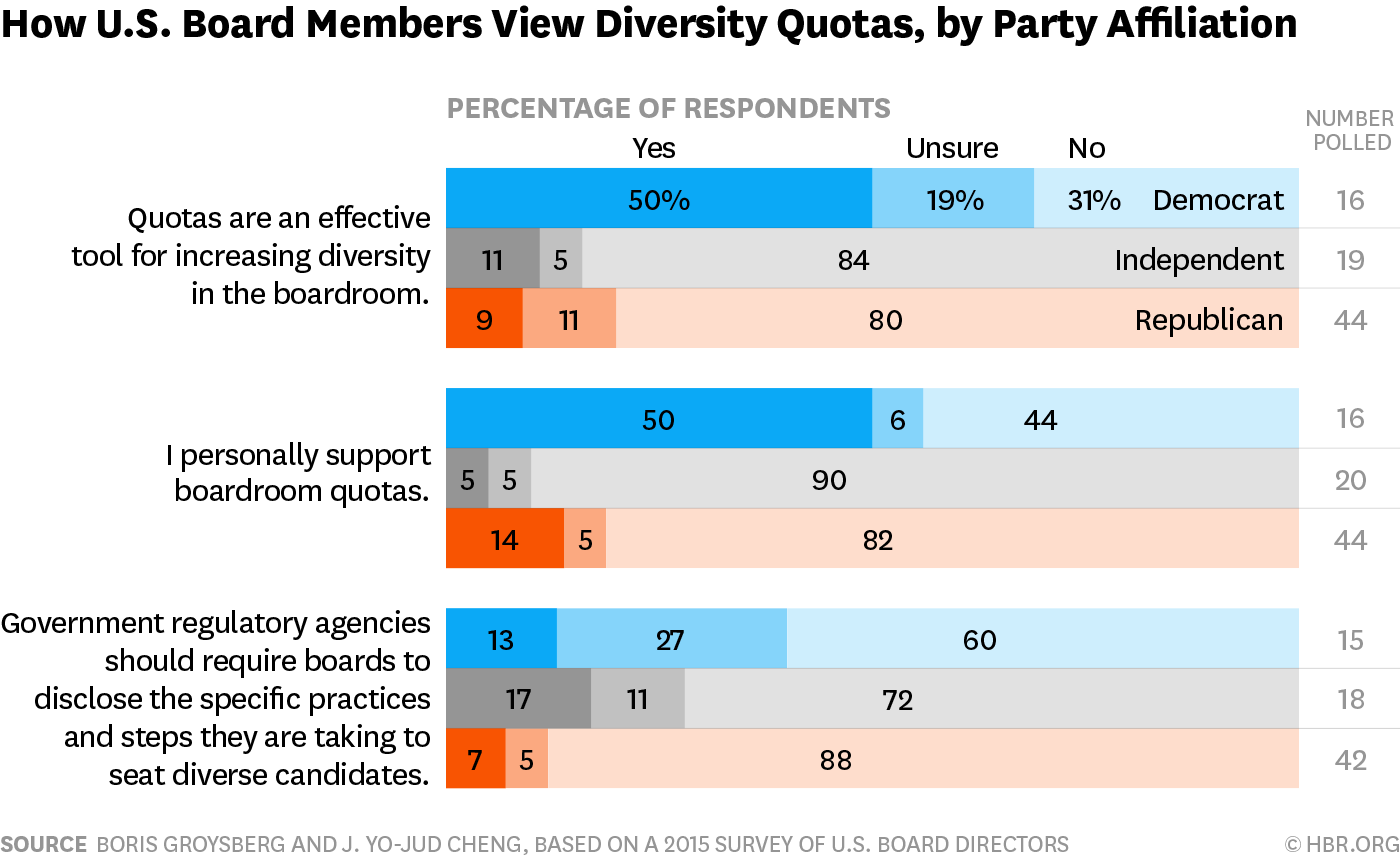 Democrat and Republican directors diverge on the skills they think are most important for board service today. Republicans prioritize industry knowledge, financial and audit expertise, and international expertise more than their Democrat counterparts. Meanwhile, Democrats place greater importance on technology expertise and risk management. It’s important to note that the representation of Democrats on risk committees is disproportionately high. These differences can manifest themselves when boards identify and select candidates for open board seats or when evaluating other directors. 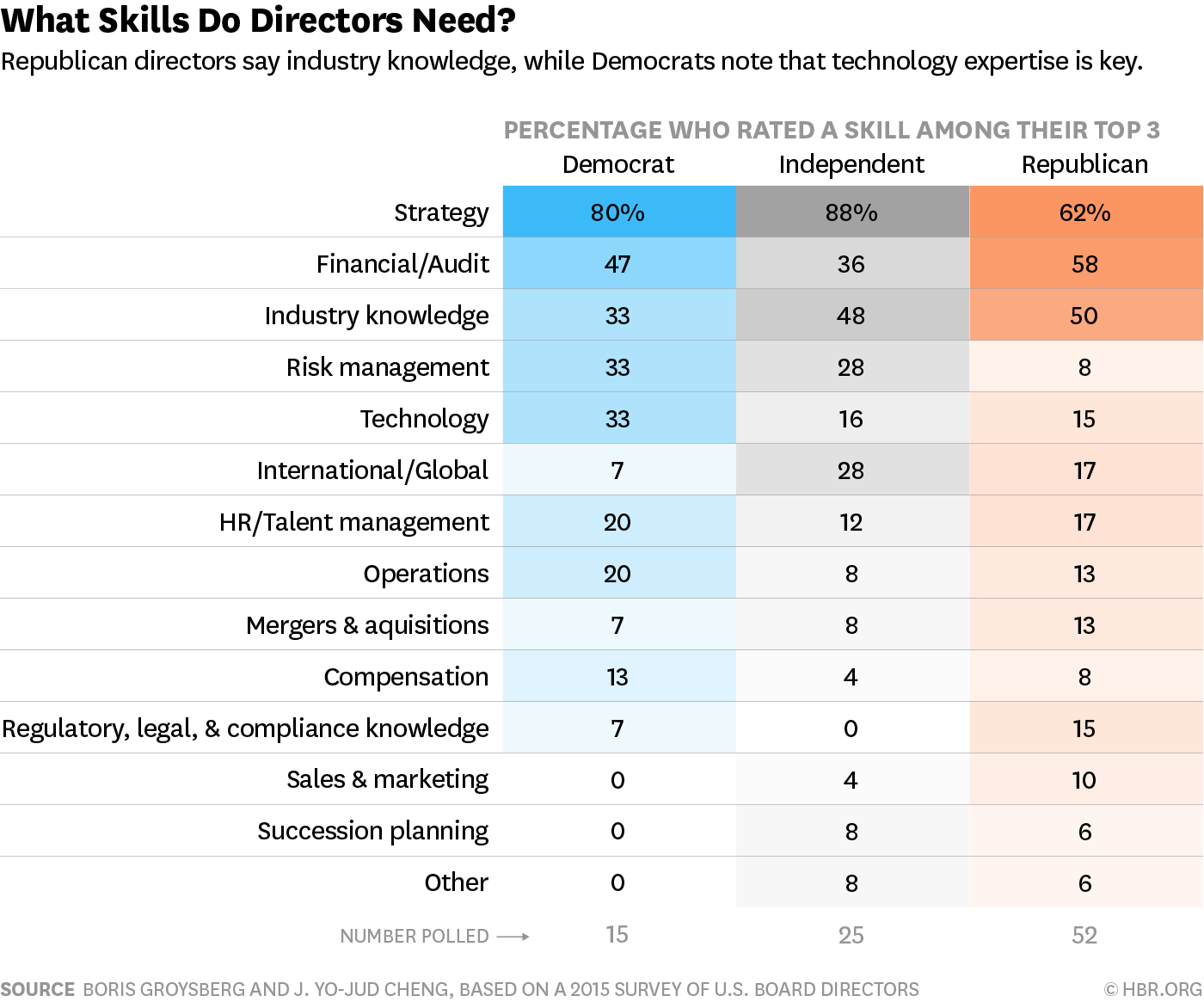 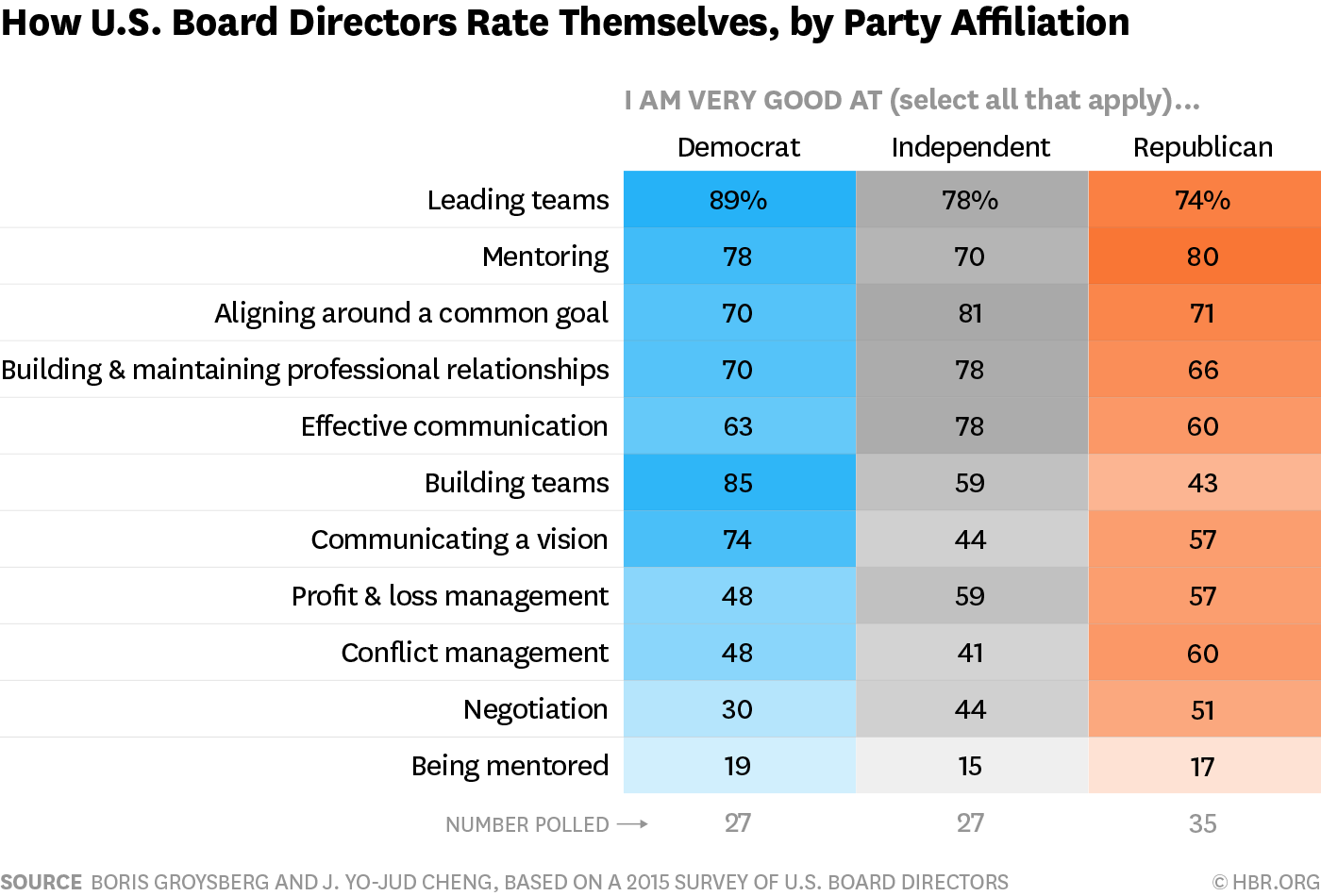 Why does all this matter? Boardrooms are not insulated from the widening rifts in political ideologies in the United States. Democrat and Republican directors differ in their economic outlooks, evaluations of the most pressing political issues, approaches to increasing board diversity, and even in their assessments of their own skills and strengths. Political affiliation is another form of board diversity–one that is rarely discussed, but could have profound implications on how corporate boards function and set priorities. Having directors with a range of political philosophies can invigorate board discussions and ensure that a wide array of issues and solutions reach the boardroom. Maintaining a diversity of political perspectives is an important consideration to ensure that boards are equipped to anticipate and tackle the multitude of challenges that confront companies today.